For information about the points this response earned, please see the Explore Medium Commentary.

Submit a video, audio, or PDF file. Use computing tools and techniques to create one original computational artifact (a visualization, a graphic, a video, a program, or an audio recording). Acceptable multimedia file types include .mp3, .mp4, .wmv, .avi, .mov, .wav, .aif, or .pdf format. PDFs must not exceed three pages. Video or audio files must not exceed 1 minute in length and must not exceed 30MB in size. 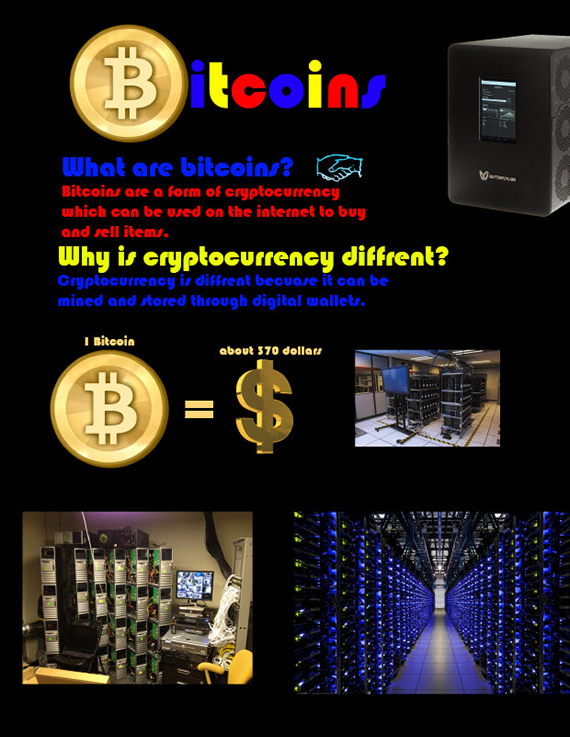 Submit one PDF file in which you respond directly to each of the prompts below. Clearly label your responses 2a–2e in order. Your responses must provide evidence of the extensive knowledge you have developed about your chosen computing innovation and its impact(s). Write your responses so they would be understandable to someone who is not familiar with the computing innovation. Include citations, as applicable, within your written responses. Your response to prompts 2a–2d combined must not exceed 700 words. The references required in 2e are not included in the final word count.

2a. Provide information on your computing innovation and computational artifact.

My computational artifact is bitcoins. The artifact explains the need for and usage of bitcoins and gives examples of the different types of private and commercial ways of mining for bitcoins. The intended use of bitcoins is to have a currency that can be easily stored, traded and used online and globally. Today people use bitcoins for anything that requires money. Since bitcoins are stored and created digitally (they are stored on digital wallets) there is no need to carry around a physical currency. Unlike conventional currency, bitcoins can be traded and stored anywhere in the world. My computational artifact describes this cryptocurrency because it features pictures of types of bitcoin mining machines and describes the uses for bitcoins. My artifact also describes the exchange rate of 1 bitcoin to US dollars, which fluctuates daily, ranging from a few cents to over 900 dollars.

When researching this topic, I chose to examine multiple sources. For my computational artifact, I researched pictures of bitcoin mining machines using the Google search engine. After I found the images, I copied them to a page in photoshop accompanied by some information from my research. . To research the artifact, I used a search engine like google to get a rough idea of the websites I would gather my information from, websites like Opposing Viewpoints, to get more in-depth information. Using Photoshop, I was able to make a clear artifact by being able to add pictures and words and by giving them a visual appeal. For the final process, I used google docs so I could work on it both at home and at school.

2c. Explain at least one beneficial effect and at least one harmful effect the computing innovation has had, or has the potential to have, on society, economy, or culture.

Bitcoins represent an innovative technology because they change the way we think of currency from a physical coinage to a digital currency. The fact that it’s digital currency makes it available to everyone, but not really because you have to have specific bitcoin mining machines (specific computers designed to do a specific task) to obtain the currency.

Positive effects of bitcoins: Bitcoins can have positive effect for investors, sellers and buyers, due to their large value. Since bitcoins have a high exchange rate, buyers and sellers can earn a lot of money over a short period of time. Someone with very little initial income could make money by buying a low cost mining rig and starting off small, then working their way up.

Bitcoins, however, can also have a harmful effect for users and even government's. Since bitcoins cannot be traced, they can be used to purchase illegal items, particularly on the deep web. Any anonymous buyer can buy whatever they want. Bitcoins can also overpower a preexisting currency in place in a country. For instance, Japan banned this currency because its citizens were relying too much on it and using it to buy illegal things such as drugs. Bitcoins can also be used to purchase weapons which can be a security threat.

Bitcoins are backed up from real currency from all over the world. To acquire bitcoins, you must use the internet to find data, download software, make accounts for your digital wallet and join pools. When a computer mines for bitcoins, it is really solving equations to generate numbers that are the equivalent to decimals of a bitcoin. The longer the computer runs, the more money you can potentially make. By mining bitcoins, you are transforming data into money. The only data concern linked to bitcoin usage is the possibility of using this currency for illegal items, which can be a health and security threat.

2e. Provide a list of at least three online or print sources used to create your computational artifact and/or support your responses to the prompts provided in this performance task.