Einstein and the World Year of Physics

One of my goals in teaching physics is to help my students see the great scientists not only as visionary investigators of our physical universe but also as human beings with qualities that we can appreciate and connect somehow to our own personal experiences.

During this school year, I learned that one of my students is related to my hero in physics, Albert Einstein. Brett Reisman's great-grandmother Lina was Einstein's cousin. With a graciousness I've come to know is a family trait, Brett's mother Karen Cortell Reisman agreed to visit my students to share some of Einstein's photos and letters that were addressed to her family. It was a delightful hour in which we got a glimpse of the personal family side of a great genius of the twentieth century. 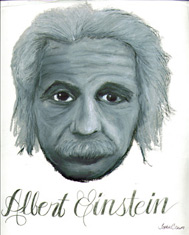 Original pastel portrait of Einstein by Sophia Cisnero, a student at Greenhill School

Mrs. Reisman read various letters that gave us many insights into Einstein, the man. The letters are full of his good humor and sincerity. Though he did not feel comfortable talking much about himself, perhaps not wanting to dwell into his failing health or political issues, his warmth and closeness to family is apparent. He is optimistic and encouraging. He talks about his enjoyment of life in the United States and shows his wit when referring to his cousin Lina relocating as "moving her point of gravity closer to his vicinity."

This was the first time in my teaching career that I have had a personal connection to such a renowned figure. My students and I were treated to a unique afternoon, and I know that the study of physics, especially the topics related to modern physics, will always have a special significance as a result.

World Year of Physics logo (other downloadable images can be found at: www.physics2005.org)

The World Year of Physics 2005 is an international celebration of physics in which more than 30 nations are participating in yearlong celebrations with public lectures, museum exhibits, and educational projects. The celebration has been endorsed by the United Nations and is timed to coincide with the one-hundredth anniversary of Albert Einstein's annus mirabilis. For more information, visit the World Year of Physics official Web site: www.physics2005.org.

In 1905 Einstein published four brilliant papers in the Annalen der Physik. These papers were to transform twentieth-century scientific thought:

In this paper Einstein challenged the wave theory of light, suggesting that light could also be considered as an assortment of particles. This was fundamental in the development of quantum physics. For his study of the photoelectric effect, he won the Nobel Prize in 1921.

This paper on Brownian motion helped explain the random motion of particles suspended in a liquid. Einstein blended ideas from kinetic theory and classical hydrodynamics to derive an equation for the mean free path of the particles as a function of time.

"On the Electrodynamics of Moving Bodies"

This is probably the most famous of Einstein's 1905 papers. It is this paper that founded the special theory of relativity in which Einstein showed that absolute time had to be replaced by a new absolute: the speed of light.

"Does the Inertia of a Body Depend on Its Energy Content?"

This is a follow-up to the special relativity paper in which Einstein presented a preliminary version of the famous equation E = mc2.

Einstein's work helped open the field of quantum physics. The study of the photoelectric effect has particular relevance in the AP Physics course outline:

A. Atomic physics and quantum effects

This virtual lab exercise consists of analyzing a simulation of a photoelectric effect experiment. The objective of the lab is to collect data for three metals in order to create a graph that will allow the students to find the value of Planck's constant.

The Web page contains a downloadable student worksheet and a link to the simulation: http://physicsquest.homestead.com/quest8ac3.html.

Other photoelectric effect simulations can be found at the following Web sites:

MSU Applet: The Photoelectric Effect
This applet shows the photoelectric effect with three different materials: sodium, cesium, and silver. The user can vary the light intensity, light wavelength, and the voltage and then observe whether or not an electric current was produced.

Photoelectric Effect by Phillip Warner
(The applet can be found on other Web sites as well.) This applet shows 14 different metals. The user can set the intensity to either low or high and vary the wavelength. This applet offers a visualization of the electrons being ejected from the metal and gives a reading of the energy of the electron in electron volts.

After the AP Physics Exam

One of the most popular topics to teach after the AP Exam is special relativity.

I like to introduce the topic by having a discussion on the concept of time. I divide my students into teams of two and have them read a vignette from Alan Lightman's book, Einstein's Dreams (ISBN 0-679-41646-3). Students receive a few discussion questions, and their task is to present their conclusions in front of the class. A detailed lesson plan can be found on my Web page: http://physicsquest.homestead.com/quest8ac2.html.

After that activity, I present a unit on special relativity divided into five sections as follows:

Einstein's Special Relativity: Discover It for Yourself by Ernie McFarland

ISBN 1-895579-23-6
Trifolium Books Inc.
This inexpensive book ($8.95) contains a straightforward approach to special relativity. My students found Dr. McFarland's book readable and engaging. He presents exercises with clear, detailed solutions, and each chapter contains a set of exercises and challenging problems. A separate Solutions Manual is available to instructors.

Einstein Light
I strongly recommend this website from the University of New South Wales in Australia. The different modules are presented in attractive Flash simulations and are accompanied with great explanations with or without math. If you prefer, you can view this page in HTML format.

Galileo and Einstein Lectures
This site features excellent lectures by Michael Fowler from the University of Virginia.

How Stuff Works: How Special Relativity Works
Easy-to-understand explanations on special relativity can be found on this Web site.

Lecture 21: Special Relativity
An illustrated summary of the main concepts in special relativity is presented by Terry Herter from Cornell University.

Notes on Special Relativity
These excellent lecture notes are by Tatsu Takeuchi from Virginia Tech.

NOVA: Einstein's Big Idea
This Web site is related to the original NOVA program on Einstein. It also includes a Teacher's Guide.

Classroom Activity: A Classical and Relativistic Trip to a Black Hole
This activity by PBS effectively connects concepts from Newtonian mechanics to special relativity with astrophysics.

Michelson-Morley Experiment
In this excellent simulation of the famous experiment, the user can change the rotation of the mirrors and the velocities of light and ether.

Space-Time Lab
This Java simulation from Cal Tech includes six experiments. Each experiment includes a visualization and a space-time graph.

Concept of Space and Time in Special Relativity
This simulation by Fu-Kwun Hwang shows a light clock simulation. It includes a good explanation.

A Walk Through Time
This website by the NIST (National Institute of Standards and Technology) Physics Laboratory presents an evolution of time and how it has been measured throughout the ages.

Einstein—Image and Impact
Presented by the American Institute of Physics' Center for History, this is the most comprehensive online exhibit on Einstein.

Einstein: A Life by Denis Brian
ISBN 0-471-19362-3
John Wiley and Sons
I greatly enjoyed reading this biography of Einstein. Brian presents an outstanding portrait of Einstein's life with explanations of his scientific accomplishments.

E = mc2: A Biography of the World's Most Famous Equation by David Bodanis
ISBN 0-8027-1352-1
Walker and Company
This interesting book introduces the reader to the concepts behind Einstein's famous equation.

Dolores Gende is a teacher at the Parish Episcopal School in Dallas, Texas. Although her degree is in chemical engineering, she has taught physics for 22 years. She is a Table Leader for the AP Physics Exam, an AP workshop consultant, and a Web designer. She has been AP Central's content adviser for physics since 2004.