Rosalind Franklin: She's Worth Another Look

If you were to ask my students about the discovery of the structure of the DNA molecule, most would come up with the names of James Watson and Frances Crick. I, like most biology teachers, include the contributions of Rosalind Franklin when teaching about "the race." But what do students remember about her after the unit on DNA is only a mist in their brains? Some remember her X-ray diffraction technique; others might say, "She's that lady who got her notes stolen."

The story of the race to uncover the structure of DNA has been told many times from many different perspectives. Rosalind Franklin's work began while she was at London's King's College. Franklin was known for her meticulous preparation of her DNA samples for X-ray diffraction photographs, and the picture of the B-form of DNA proved most valuable. Franklin was unhappy at King's College—she clashed with her colleague Maurice Wilkins, and the situation was further strained by the presence of Watson and Crick. She was eager, in fact, to assume a new position at Birbeck College. She also was in a rush to finish work on the X-ray diffraction experiments and to publish her results. 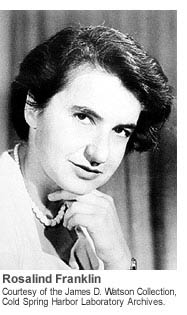 With her research concluded, Franklin moved on to Birbeck College to work on other biomolecules, leaving the controversy over the ethics of the situation behind her. Watson, Crick, and Wilkins received the Nobel Prize in 1962, after Franklin's death (the award is not given posthumously). Her X-ray diffraction photo was a crucial piece of evidence that led the other scientists to fame.

Even though I try to portray this controversy in a neutral way, my students come away with one of two attitudes toward Rosalind Franklin. Either they adopt James Watson's attitude that she was a mediocre scientist of little merit, or they get defensive about her and the fact that her notes were "shared" without her consent. Even though her contribution to the elucidation of the structure of the DNA molecule is what put her name in biology textbooks, there is more to her career as a scientist that should be explored and celebrated.

Before and After DNA

Long before her dealings with Wilkins, Watson, and Crick, Franklin studied carbon and graphite microstructures. While earning her Ph.D. from Cambridge, she worked as an assistant research officer for the British Coal Utilization Research Association. Her research focused on the microstructures of various coal types to determine why gases and water could penetrate some types and not others. This research was important and timely. Charcoal had been used in gas masks during World War I as well as in those being used at the time in Britain. Franklin, her family, and fellow students lived through the Blitz in the early 1940s. As a result of the ongoing threat, Franklin and other students carried gas masks to classes at Cambridge.

The focus on carbon and graphite research continued to a new job in 1947. Franklin worked in a laboratory in Paris, where she practiced and perfected the X-ray crystallography techniques that would later make her famous. During the middle and late 1950s, after her work on DNA's structure, Franklin continued her use of X-ray crystallography to examine the structures of virus particles.

The main focus of the early research was the Tobacco Mosaic Virus (TMV). Her research led her to believe that TMV was a hollow tube of protein. She hypothesized that the RNA of this virus was single-stranded and helical. Her characteristic perfectionism in experimental procedure and technique led to the discovery that the RNA was actually embedded in the proteins and not contained only in the core as expected. The descriptions Franklin provided were incredibly detailed, including the angle of the location of the RNA relative to the axis of the virus.

Franklin was passionate about her research and felt that it would lead to a greater understanding of viruses that plagued man. She expanded her research to include the polio virus and a potato virus, but her research was cut short when she developed ovarian cancer. She was extremely frustrated, knowing her work on viruses was not completed. Franklin died in London on April 16, 1958. Her research was presented at the 1958 World's Fair and received the accolades it deserved.

Watson, James. The Double Helix: A Personal Account of the Discovery of the Structure of DNA. New York: Athenaeum, 1968 and London: Weidenfeld and Nicholson, 1981.